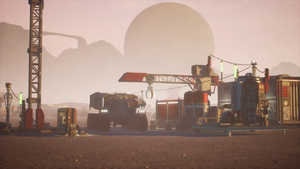 A truck arriving at an outpost.

There are 4 vehicles that engineers can use to travel and transport items: Tractors, Explorers, Trucks and Trains . Like buildings, vehicles can be painted in color.[1] There are no new planned vehicles for the future,[2] and there are no further unconfirmed vehicles.[3] There is no cap on the number of vehicles in the world.[4] Engineers, enemies and Lizard Doggos can be run over by vehicles, dealing no damage to the target.[5]

The Self-driving menu for a wheeled vehicle. (old UI)

Tractors, Explorers and Trucks can either be driven by the engineer or automated using the self driving menu (accessed using C) and recording a path.[6] When recording, waypoints (displayed as blue triangles) are placed periodically along the vehicle path.[6] Self-driving does not work when the engineer is riding the vehicle.

The automation uses waypoints for pathing: It's a point to point system, which means vehicles will always face the current waypoint until they reach it to target the next waypoint.[6]

Self driving requires a clear straight path between waypoints and a closed loop of waypoints to work optimally. If a vehicle collides with an obstacle (including another vehicle), it will reverse and adjust its course, but vehicles will not actively avoid each-other.[7]

Wheeled vehicles require fuel items to operate, and are not picky as to what qualifies as fuel. Different fuel items are consumed at different rates, based on what item is used as well as which vehicle. The Tractor consumes the least fuel, followed by the Truck and the Explorer which consumes the most. Below is a table of how long does one fuel item last at constant maximum acceleration in seconds.

Vehicle tech can be unlocked via various milestones, along with the discovery of new resources.[9]

An engineer piloting a vehicle in third-person perspective.

Engineers can enter and exit vehicles via E, the enter vehicle hotkey.[10] When piloting a vehicle, the camera switches to third-person perspective.[10] There are currently unknown features which will allow performing stunts.[11] Vehicles cannot be upgraded.[12] Some small foliage can be destroyed when run into by a vehicle. In addition, the Tractors can destroy some smaller trees which Trucks cannot.

The Truck and the Explorer can both drift. The engineer can activate drifting with SPACE to allow for tighter, sliding turns, similar to a handbrake, to give greater control.

Vehicles themselves are immune to fall damage.

The self driving menu for the Electric Locomotive, showing two Train Stations added to the stops list. (old UI)

Monorail trains that consist of Electric Locomotives and Freight Cars can also be driven manually or automated using the self driving menu. Trains are bound to a Railway and cannot derail from it, even when reaching a dead end which will make them stop instead.

It is not possible to link or un-link carriages. Locomotives and freight cars have to be snapped to each other when being constructed, otherwise they will phase through each other.

An automated path for trains can be created by adding Train Stations to the stop-list. Trains will go through them in loops in their respective timetable. Trains on autopilot will always be forcefully stopped at a train station if they fail to brake in advance, for example when the station is right after a steep down slope.

Unlike wheeled vehicles, autopilot can be active even when the engineer is inside of a locomotive by enabling in in the self-driving menu (C).

Trains run exclusively on electricity. The power consumed is from 25MW for each locomotive when it is idle up to 120MW when speeding up. All train stations also consume 50MW even when idle, or +50MW for every Freight Platform that is used for loading/unloading resources.

Trains are completely immune to all forms of damage, as they lack the Vehicle Health bar completely.