From Satisfactory Wiki
(Redirected from Track)
Jump to: navigation, search

A train on some track.

Railway is the buildable structure which trains run on. Railways are used to connect Train stations where trains stop. Railways can be laid on the ground. It cannot loop upside-down.[1]

Switches are made by joining two rail segments and then adding a third segment to that junction. A flag will be placed on the switch, but currently, it's wonky, and its setting is ignored by automated trains.[2] A railway split cannot be created directly before or after a Train station or freight platfrom, so a short piece of railway is required in between.

The length for a single segment is limited to between 12 to 100 meters. You can join multiple segments end to end to build a longer rail.

The building of railway curve is currently glitchy. If start building from an existing railway and build a curved Railway with a free end, it is usually easier to build. However if attempt to connect 2 existing railways with a curve, it will show 'Turning Radius too tight' warning, despite the radius is larger than 17 meters. Therefore if a curved railway cannot be build, try to rebuild it with a different build order. 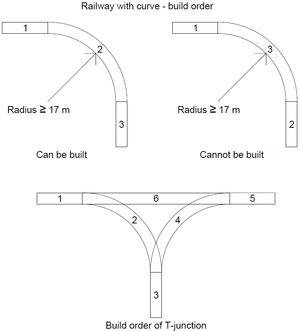 The advised build order of a railway curve.

The steepest measured slope is 1:2.322. To achieve this you have to find terrain with matching gradient or by building short segments of sloping rails below the main rail.

It is advised to build the Train Station before building the rail. Attempt to build the station on top of the existing railway, the station will be built on top of it but not connected. You could, however, build the railway with free end snapped to the foundation then build a train station at the end of it. Same applied to Freight Platforms.

It is advised to put a end-of-line loop for single direction train. Building the loop itself takes trial and error, and separate the loop into several shorter curves are advised: the shorter the curve, the lesser chance that 'Too tight turn!' warning will appear.

There is no collision box implemented at the moment, which means that the rail (and entire trains) can clip through the ground. Judging from the visual it is about 6 meters wide and 1 meter high.

There are no supporting columns for the rail, as opposed to what is displayed in the E3 trailer. The latitude curvature of a rail is only dependent on the slope of the starting and ending points, which means if the starting and ending points lie on a flat surface such as foundations, the rail will be perfectly horizontal, despite a large gap in between. On the other hand, attempting to build on uneven ground could lead to unexpected sloping of rail.

The railway can conduct power, to feed it to Electric Locomotives, or between any connected station. You could utilize it as the backbone of your Power Grid. A simple crossroad will not conduct power to the crossing railway, both railways must be connected with a split way to conduct power.

Sometimes you may wonder a railway looks curvy, even though you have built it on the foundations. It is because the very first segment that you built on the foundation is not straight: and that curvatures passed down to the next segment you build and it never dissipates. Make sure the railway is straight from the beginning.