This article is about Resource Scanner, not to be confused with Object Scanner 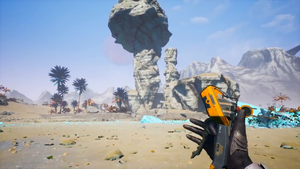 The Resource Scanner being used to scan the terrain.

The resource scanner is used to scan the nearby area and shows the Engineer locations of potentially useful Resources. By default, it can scan for Iron Ore, and new resources are added after completing certain Milestones. The resource scanner is the same tool as Construction Tool but the engineer handles it with the left hand.

Currently in Early Access, the Geyser uses the same icon as Crude Oil in the compass when scanned. It is believed that it is the placeholder graphic.

Also, the scanning pulse can be used as some sort of radar to guide the engineer in f.e. dark and foggy areas like caves (evtl. with poison gas vents, which worsen the view on top). The pulse will expand circularly, indicating all surfaces of walls and other properties it is passing by.