The Nuclear Power Plant is a building that generates power using Nuclear Fuel Rods and Water, producing Nuclear Waste in the process.

When overclocked, Nuclear Power Plants scale differently compared to any other generator buildings; their power exponent is 1/1.321928 instead of 1/1.3. Therefore, at 250% clock speed, they operate 2.00000009951 times as fast, for resource input, waste output, and power production. This allows them to safely operate overclocked when Pipeline Mk.2s are used to supply water, and unlike other generators, it may be worth overclocking to simplify the setup.

A single normal Uranium node can support the following number of Nuclear Power Plants operating at peak capacity, without the use of alternate recipes: 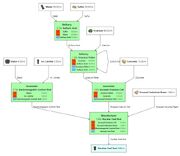 Additionally, this nuclear power spreadsheet can be used to calculate all the raw materials, required buildings, total power, and more. Alternative recipes are used.