The Hyper Tube is a pipe-like transport system used to quickly transport engineers over long distances. A Hyper Tube Entrance is required for entry, but not for an exit. Hyper Tubes are non-directional and can be entered from both ends if an Entrance is placed on each end.

Engineers can change the travel direction or nearly stop during mid-flight by holding the directional key (W or S). No Tube junction or crossing is possible. If the Tube is built through terrain or trees, engineers traveling inside will be able to clip through.

Travel speed is decreased when traveling upwards or marking sharp turns and is increased when traveling downwards or in a straight line. When entering a Hyper Tube, the engineer's entry velocity is added to the Tube's velocity boost, which, when chained, allows for the construction of cannons that can propel engineers with speeds exceeding 500 km/h, making it over four times faster than the Electric Locomotive. It is currently one of the most effective means of crossing large distances.

If the Hyper Tube booster is built correctly, this is the gained speed based on entry velocity and the number of entrances:

Hyper Tube Cannon: a series of short Hypertubes and their powered Entrances, chained in a straight line with a tube curved upwards at the end to launch Engineers across a long distance.

Flying from Rocky Desert to Oil Islands using 14 Entrances, or 1.7km in 16 seconds. In this example, it is equivalent to 382.5km/h 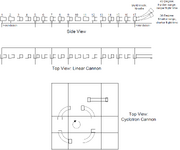 The setup of the Hyper Tube Cannon.

A Hyper Tube cannon can be constructed by chaining Hyper Tube Entrances:

How to construct a Hyper Tube cannon[edit | edit source]

To use the Hyper Tube cannon[edit | edit source]

To use the cannon for fast map exploration[edit | edit source]

When building from a fixed point to a free point, a Hyper Tube Support will be automatically added to the 2nd point, including its building cost. The support itself needs two clicks to be built, before the first click, use the mouse wheel to rotate the support (and thus the Hyper Tube) horizontally. Before the 2nd click, move the mouse up/down to change the support height (between 1- 7meters) then use the mouse wheel to change its pitch (vertical rotation).