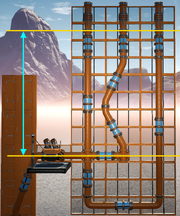 Head lift is only affected by the elevation difference but not the shape of the Pipeline.

Head lift determines how high fluids can be pushed up: only the vertical distance, or the difference between the elevation of starting and ending points matter; it does not depends the Pipeline's shape. Each meter of head lift can lift the fluid by 1 meter vertically. Fluids can flow freely along perfect horizontal Pipelines.

Head lift does not depends on the flow rate, but can affect it.

The following buildings can store and relay head lift:

Head lift produced by different buildings have different base starting point, see below.

Diagonal Pipeline is an exception: the reading of head lift, as displayed on a Pipeline Pump, will be slightly higher and not linear.

Currently the only way to measure head lift is by constructing a Pipeline Pump on the Pipeline at the elevation of measurement then interact E with it. You can estimate head lift by calculating the elevation difference, using walls (4 meters high) or foundations (4m, 2m or 1m)

Note: Fluid Buffer and Industrial Fluid Buffer produce head lift proportional to the percentage filled. For instance, a half-filled buffer will produce half of the head lift.

Perfect horizontal Pipelines require 1.3 meters of head lift to be fully filled regardless of its length. As it fills up, it also stores its own head lift proportionally, up to 1.3 meters. This effect will then propagate to the next pipeline and causes the successive pipelines to be filled up. Only when a segment of pipeline is fully filled, the head lift of more than 1.3 meters can be propagated (be it from a pump or other buildings). Fluids take time to fill up a very long pipe, but once it is fully filled, fluids in it can flow with the full flow rate (or whatever the source's flow rate).

Vertical pipelines can store maximum head lift equal to its vertical length, measured from its bottom end to the top end. Its stored head lift is proportional to the percentage of the fluid filled, for instance a half-filled 10-meters pipeline stores 5 meters of head lift. A vertical pipeline needs to be fully filled before the next pipeline above it can start to receive fluid. A very tall pipe requires a very high head lift to be fully filled. If lower head lift is provided, it can only be filled partially.

If somehow the fluid source is stopped and the source head lift drops, the previously stored head lift in pipes will attempt to equalize among connected pipelines: this means fluids can backflow from the pipes with higher head lift to the pipes with lower head lift, as pipelines are bi-directional in nature. Lets say, if there are 2 horizontal pipelines with identical length are connected in series, with 1 of them fully filled and the other one emptied, then the fluid within them will equalize themselves until both are filled equally, that is, 50% full. During this equalization process, the fluid flow can oscillate back and forth, taking a long time before fully stabilize.

All of the above principles also hold true for Fluid Buffers and Industrial Fluid Buffers - they are just pipelines but with much larger capacity and head lift. Just take note their stored head lift is counted from the pipe inlet level, not from the foundation level. Combining all the above knowledge, chaining multiple Fluid Buffers in series is a bad idea as the system requires a very long start up time - consider attaching buffers to the 'sideways' of a pipeline instead, by using Junctions. 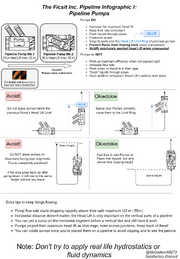 When a single fluid source is split into multiple Pipelines via a Pipeline Junction Cross, the output head lift of each pipe is equal to the input. outA = outB = in The flow rate is split, but the head lift is not.

When multiple fluid sources with different head lifts are joint via a Pipeline Junction Cross, the highest head lift among them is applied to the entire pipe network. out = Max (inA, inB) This 'sharing' effect will not hinder the output of fluid buildings with lower head lift or positioned at the lower points, for instance, a Water Extractor with its output pipe under a head lift of much greater than 12 meters will still be able to push out Water, provided there is space allowed for it to.

Both of the above hold true regardless of the flow rate of input and output Pipelines.

Pipeline pumps, if used in large quantity, can be a burden to the Power grid, thus innovative solution is highly desirable to minimize the power usage. When multiple fluid sources with different head lifts are connected to a single or multiple pipelines, the highest head lift among them will be applied to the entire connected pipe network. This makes head lift exploits possible, provided water bodies at different heights are in close proximity such as near the waterfalls.[1]

The same technique can be applied to Oil-related fluids, just replace Water Extractors with Oil Extractors or Refineries.

A Fluid Freight Platform does not generate opposing head lift when being filled up, and thus a fluid source can easily fully fill it up as long as the pipe inlet level of the Fluid Platform is within the source's head lift. As such it is advised to always use its lower pipe inlet first, followed by the upper inlet if the input rate higher than 300 m3/min is desired.

A Fluid Freight Platform requires a connected powered Train Station to receive and / or output fluid. It can output fluid regardless if it is set to load or unload.

The actual head lift provided by a Fluid Freight Platform is 11 meters, measured from the pipe connector. As such, it is always advantageous to use the upper pipe outlet first, followed by the lower outlet if the output rate higher than 300 m3/min is desired.