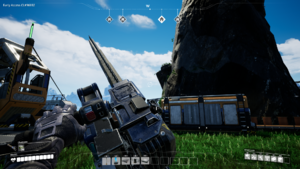 The HUD or Heads Up Display is a graphical interface overlaid onto the screen to give the engineer information. It includes a cross-hair, compass, hotbar, a list of shortcuts, health bar, and equipment status.

The compass, showing icons for the HUB, a vehicle, and a beacon.

The hotbar, showing icons to construct power lines, conveyor belts and a foundation.

The hotbar is a list of numbered slots, similar to hotbars found in many other games. Placeable entities such as vehicles and buildings can be placed in the slots, allowing them to be selected and placed. For example, if you wish to build conveyor belts without having to enter the build interface every time, you can place it in the hotbar by entering the build menu and hovering over the image of the conveyor belt with the mouse. Then you press a number (1-0) on your keyboard and the conveyor belt will be placed in the corresponding slot on your hotbar.

The hotbar currently serves for building shortcuts only, it does not interact with the player's inventory.

Experimental: 10 hotbars are now available. Scroll through them with ↑↓ or Alt+

The shortcuts menu, showing several icons and their keyboard shortcuts, with the map still locked. 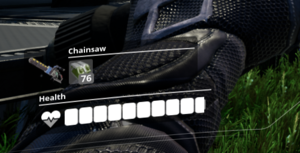 The health bar indicates how many health points the engineer has, one segment corresponds to 10 health points, with full health at 100 HP (10 segments).

If any equipment is equipped, a corresponding status bar showing the status of the equipment will appear above the engineer's health bar:

To Do List[edit | edit source]