The crashed FICSIT Freighter in a Crash Site.

A Hard Drive can be retrieved from a opened Drop Pod. 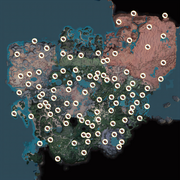 Crash Site locations as of Update 3.

Crash Sites are crashed FICSIT Freighters that can be found in the world, carrying

Hard Drives. There are 89 Crash Sites in total.[1]

Unlocking a majority of pods will often require a certain amount of a part or power supplied. If those requirements are fulfilled, the handle in the UI becomes functional, allowing to open the hatch and retrieve the Hard Drive within.

Some pods have no unlock requirement, the handle is always functional and the drive can be retrieved at no cost.

The following items can be found scattered around the Crash Sites:

All scattered items are fixed, including the amounts (e.g. two different games will have the same items in the same amounts, unless they are changed by a game patch). There is a large cave to the east of Islands containing lots of loot-able items, but no Crash Site can be found nearby.