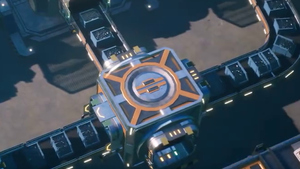 A merger in action.

A Conveyor Merger is a building that takes items from three input belts in sequence and outputs all items onto a fourth belt. If any input is missing the merger takes the items from remaining input belts. If the output belt is slower than the total speed of all input belts, the input items have to wait. [1]

Conveyor Merger have fairly large collision boxes which are likely to obstruct additional parallel belts. For example, a splitter for

Screw belt is likely to block the construction of

Iron Plate belt. It is advised to build other nearby belts before building the splitter/merger.

You can stack the mergers on top of each other, each stacking offset by 2-meter height.