Conveyor Belts are used to transport items, such as raw ores, refined materials or the engineer between 2 locations or 2 buildings. They consist of a single track that can curve around bends, as well as slant up and down. Many structures have ports in order to allow belts to be connected to these buildings.

There are multiple marks of conveyor belt available; each mark is faster than its predecessor. When items enter a belt at a rate higher than the belt's speed, items can be compressed together. For a visual comparison of the different belt speeds, see this YouTube video from Coffee Stain Studios.

Note: all types of Conveyor Belts have a different belt texture with their respective speed. The decorative lights on the sides of each conveyor belt change with every mark.

The maximum length a belt can span between Conveyor Poles and/or buildings is 49 meters (equivalent to 6.125 foundation lengths). The cost is approximately 1 item every 2 meters.

The maximum allowed slope (gradient) is 35° or 1:1,428. As the turning part of a belt is always horizontal, only the straight part can be sloped, and thus counted towards the gradient.

The turning radius of the conveyor belt is 2 meters. As such, when building 90 degree turns, always count 2 meters or 2 'grids' from the desired turning point of the belt.

This article may need cleanup to meet quality standards.
Please help improve this if you can. The Discussion page may contain suggestions.
Reason: "Verify, Update 3 changed many recipes"

This table shows how expensive each belt tier is based on how much of its materials can be made per minute (Miner Mk.1/Oil Extractor, Normal node purity).

There are currently 5 tiers of Conveyor Belts available in the game:

There is one unreleased Conveyor Belt tier planned for future updates.

Note: Prior to being removed internally, Conveyor Belt Mk.6 could only transport 900 items per minute. That number has since increased to 1200[1], allowing for a Miner Mk.3 overclocked to 250% on a pure node to produce at maximum efficiency.

This article may need cleanup to meet quality standards.
Please help improve this if you can. The Discussion page may contain suggestions.

The game prevents the engineer from connecting a conveyor belt the wrong way into a building. Should the engineer not be able to connect the belt between two buildings, check if the buildings are rotated properly.

Clicking an input port on a building will create a belt that moves items into the building. Otherwise, the belt will run from the starting point to the ending point. See the image on the right to learn how to distinguish between input port and output port. 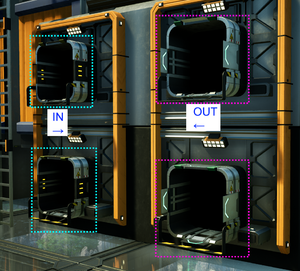 You can place belts on a structure. By placing the starting point of the belt on terrain or foundation, you can end the belt on top of a building such as splitters or containers. You can even stack belts on belts directly, without Conveyor Pole Stackable.

Multiple conveyor belts can be stacked on top of each other neatly with Conveyor Pole Stackable, which is fixed at 2 meter vertical interval. By using Conveyor Wall Mount and some walls, it is possible to stack belts at 1 meters vertically apart.

Conveyor Belts can be used to move players around. The player moves faster than the items on the belt, strangely. Belts can be built temporarily for exploration, such as acquiring Power Slugs.

The edges of the belt do not move the player, so they can be used to walk against the motion of the belt.

"The floor is too steep"[edit | edit source]

Trying to land a belt on the edge of the cliff or thin structures such as on power cables will result in this message. Moving the cursor around and find a flat point to build the end-pole of the conveyor belt. Else, consider building Splitter on the cliff as it is easier to snapped to odd-shaped terrain.

"The conveyor belt is too long"[edit | edit source]

The length limit for the conveyor belts is 49 meters and it is counted in 3-dimensional length. This is exactly long enough to span 6 foundations at the same height. To fly over the belt across large gaps it is advised to build a bridge out of foundations or walkways first.

It is possible to cross belts, as belts do not collide with each other. Belts can also pass through other objects such as terrain, trees, walls, foundation, etc. A belt cannot pass through splitters, mergers, factory buildings and power poles.

This article may need cleanup to meet quality standards.
Please help improve this if you can. The Discussion page may contain suggestions.
Reason: "Verify, Update 3 slowed down engineer transport speed a bit to match the speed of parts"

Conveyor belts can be used as a means of transportation around the map. By using a conveyor ramp and the Jetpack, one can travel long distances with little to no setup efforts. Belts Mk.5 and above offer higher movement speed than that of the Explorer.

Approximate movement speeds for a player standing still on a conveyor belt are given in a table below. Regular running speed is 32 km/h and 48 km/h with Blade Runners.