From Satisfactory Wiki
(Redirected from Construction Tool)
Jump to: navigation, search
This article may need cleanup to meet quality standards.
Please help improve this if you can. The Discussion page may contain suggestions.
Reason: "Formatting needs to be improved" 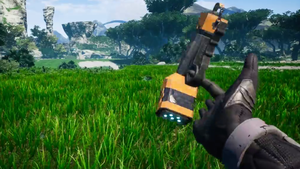 An engineer spinning a Build Gun in their hand.

The Build Gun is a tool engineers can use to place and dismantle buildings.[1] It projects a hologram showing where the build-able structure will be placed,[2] and highlighting key features such as belt inputs, outputs, and power sockets. Thick teal lines will be drawn if two buildings are aligned together. It is also the same tool that does resource scanning.[3] The engineer will equip the tool before exiting the drop-pod. The tool is not craft-able and will still be equipped even after the engineer respawns or dies.

The build menu is unlocked after the engineer has hand-mined the Iron Ore for the first time.

The build menu is opened with the Q key by default. Here all the buildings the engineer has unlocked are sorted into tabs. Left-clicking a building will exit the menu and display a hologram version of the building. The engineer can then position it where they want and then left-click again to build.

Buildings can also be added to the To Do List from the build menu.

Buildings such as Conveyor Poles or Pipeline Support need multiple clicks to complete the building. The first click will place it on the ground, then use mouse to adjust the pole's height. The 2nd click confirms the build. You can toggle this setting in the "Options" menu so that you don't have to click 2 times. (Click-drag-release).

You can change build mode while building Pipelines and Hyper Tubes. Press R while building them will cycle through one of the 4 modes: Default, Conveyor 2D, Vertical and Noodles. Changing build mode can solves some 'encroachment' or 'invalid shape' warning.

The Build Gun can be brought out in dismantle mode by pressing the F key by default. Buildings that the player's cursor is over will be highlighted, and can then be dismantled by holding down left-click for 1 second. A blinking red border will appear around the screen to indicate that dismantle mode is active. Highlighted building in this mode will show you its name and refund cost. Dismantle a building give full refund.

Holding down Left Ctrl while dismantle will enable mass-dismantle, up to 50 buildings at once. All buildings pointed by the mouse will be added to the dismantle list. You can release and then hold down the Ctrl key to 'skip' buildings.

By using the dismantle gun F and aim at a building, you can query a building's input and output cargo items to know what is contained in the building. As the gun has a range of 100 meters, you can perform the query without moving near to the building and interact with it.

then aim at a building to copy its hologram.

Placement and dismantle range is 100 meters (12.5 foundation lengths). Buildings can be rotated with Mouse wheel by default, in increments of 10°, or 90° when placed on foundations.

There are currently no systems in the game equivalent to blueprints (from Factorio) allowing for building multiple structures together. A blueprint system may be added post alpha.[4]

The numeric hotkeys have some initial defaults, but it can be customized at any time.

To add a building to a hotkey, open the build menu, hover over the desired building then press a number key. The building is then mapped into that number.

Using ↑↓ to cycle through different Hotbars.

Pressing the emote wheel T and select 'twirl it' will display an animation showing engineer twirling the Build Gun.

During construction of a building, an animation displays, where building transition from hologram to solid building from bottom to top. For logistic buildings such as belt, it is according to the direction of built. Ingredients appear fly from the engineer to the building, but as soon as the building is placed down, it is function-able. For example, foundations have a build animation of about 1.5 seconds, but you can stand on it once it is built, no need to wait for its built animation.