Production and power buildings, such as Miners, Constructors or Biomass Burners, can have their clock speed set to any percentage between 1% and 250%. For production buildings, this allows them to operate slower or faster at the cost of greatly reduced or increased power usage. For power buildings the maximum power output and accompanying fuel consumption can be increased in tandem, granting more utility from a single building. Over clocking and under clocking both have utility in optimizing a factory, helping to synchronize production, increase energy efficiency and smooth out the peaks in factory power consumption.

Clock speed is the speed where the building will be running. 200% Clock speed means run twice as fast, 50% means run at half speed. This doesn't always be the case, see below.

Overclock refers to setting the clock speed above 100%.

Underclock refers to setting the clock speed below 100%. Underclocking does not require any Power Shard.

To change a clock speed, interact E with a building and look at its lower left of the UI. Underclocking can be done freely, however overclocking requires Power Shards, which are crafted from slugs. Up to three power shards can be placed into a building, each allowing the maximum clock speed to be increased by 50%. The clock speed can be changed in increments of 1% using the slider or by directly typing in a desired value for either Clockspeed or Target production rate.

Setting the clock speed by desired item production per minute rounds to two decimal places, while typing in a percentage rounds to the nearest percent. Typing in an arbitrarily high value will max out production, while non numeric inputs are ignored. Setting 0% Clock speed will result in 1% clock speed instead, this is visible when the machine UI is re-opened.

Where desired item production per minute results in a percentage with decimal, the game will automatically floor it to nearest percentage. Take note as this may lead to some efficiency loss, engineers are advised to ceil up the overclocking percentage instead.

Overclocking Miners and Oil Extractors is highly beneficial. For production buildings, the craft time is directly proportional to the clock speed, but the power required changes polynomially. As the item production rate increases, the ingredient consumption rate increases as well. The table below shows five different clock speeds on a Constructor, for example, producing Iron Rod that takes 4 seconds.

The ratio of power consumption per craft based on clock speed. The ratio is compared to the amount of power for each craft at default clock speed.

The ratio of power consumption or production for buildings based on clock speed. 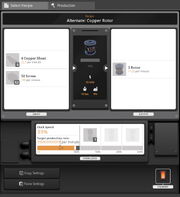 Overclocking can be given any value, but the game will automatically clip it to between 1% to 250%.

The formula for power usage is:
(power usage) = (initial power usage) × (clock speed / 100)1.6
where clock speed is an integer between 1 and 250, and
both power usage and initial power usage are measured in MW.
For relative energy usage per item produced, subtract the exponent factor by 1, that is,
(energy usage) = (initial energy usage) × (clock speed / 100)0.6
Underclocking Constructors and Assemblers in early game is highly beneficial. It can yield considerable fuel (Biomass) savings. With Splitters and Mergers available, fuel savings can be accompanied with zero loss to production rate. Miner Mk.1 with two Smelters operating at full clock speed can produce over 570 ingots from normal node with the energy of one stack of leaves. Miner Mk.1 with nine Smelters operating at 22 % clock rate yields to over 900 parts with same amount of energy. Net production rate will be virtually identical and the energy saved can be used elsewhere.

It should be noted that production buildings use the full calculated value, and as such the rounded value listed in-game is not always accurate.

Overclocking of all types of power generators provides no benefit other than saving building space.
For power generation buildings, both power capacity and fuel consumption rate are increased at the same rate. The effect of this is that the energy produced per fuel item, or Fuel Value, stays the same, so one piece of Coal is always worth 300MJ of energy regardless of clock speed. The table below shows three different clock speeds set on a Coal Generator. Note that a 250% overclock does not give 250% power as the in game target MW value suggests. The true production values are listed with the generator's fuel.

The formula for fuel burn time is:

The formula for the multiplier to power capacity is: