As part of the Unified Community Platform project, your wiki will be migrated to the new platform in the next few weeks. Read more here.

The AWESOME Sink is a special building that produces

FICSIT Coupons for use in the AWESOME Shop by destroying items inserted into it, converting them into points based on their value or complexity, which in turn are used to print the aforementioned Coupons. Each successive Coupon requires more points to be printed.

The Sink can consume as many parts as the connected conveyor can supply, therefore its maximum capacity is 780/min using a Conveyor Belt Mk.5 or Conveyor Lift Mk.5.

Multiple Sinks can be constructed. Accumulated points will be shared between all Sinks and Coupons can be printed from any. If all Sinks are deconstructed, the amount of points and accumulated Coupons is stored.

AWESOME is an acronym, which stands for "Anti-Waste Effort for Stress-Testing of Materials on Exoplanets".

Some items cannot be fed into the AWESOME Sink and will clog the input. If that happens, it is advised to pick up these items or reconstruct the belt to allow other items to be sunk.

It takes 1,692 Coupons to purchase every non-producible item in the AWESOME Shop, which would require 89,466,333,000 AWESOME points. This is equivalent to 192,378 Turbo Motors and would take about 21 hours at the current production limit of 156 Turbo Motors/min. However, it only takes 91 Coupons to unlock every unique crafting recipe, which equates to 13,373,500 AWESOME points.

Patch notes suggest further items will be added to the AWESOME shop in future releases.

Once sufficient points are accumulated to print least one Coupon, the option to print it is made available. As the 'Print' button is pressed, an animation is played, where a Coupon comes out of the slot with the actual Coupon items. These coupons must be retrieved by dragging them into the inventory or using (⇧ Shift +

). Coupons have a stack size of 500, so if the amount of accumulated coupons exceeds 500, the remaining coupons will remain in the Sink, and they can be printed out next time. In the AWESOME Sink UI, click the 'Print Coupon' button then drag or ⇧ Shift+

the Coupons into the Inventory to retrieve them. 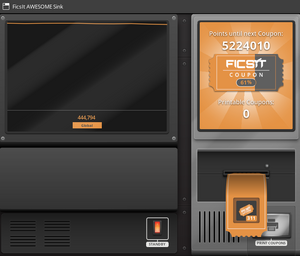 The UI of an AWESOME Sink.

This table is compiled using the data from Template:ResourceSinkPoints.json via Module:AwesomeSinkItemsTable.

Note: The first time a FICSIT Coupon is inserted, the Cyber Wagon is made available for purchase in the AWESOME Shop and no points are generated. Items not listed in this table will clog the input.

The point increase when using alternate recipes varies widely; the output from most recipes is worth between 1.5 and 2.5 times as many points as the combined input, but exceptions exist in both directions. Seven alternate recipes actually lose points, producing outputs worth less than their inputs: Compacted Steel Ingot, Coke Steel Ingot, Polyester Fabric, Rubber Concrete, Steel Coated Plate, Coated Iron Plate, and Radio Control System. The most "profitable" recipe as of Patch 0.3.3.0 is Silicone Circuit Board, which generates items worth 7.19 as many points as the input items. Other notable recipes can be found below.

Other than farming points for Coupons, the AWESOME Sink is very useful to get rid of solid by-products, which is quite useful for any setup involving Refineries. Connect a Smart Splitter with an Overflow setting, with the Sink connected to the overflow output. An AWESOME Sink is also useful for forcing the factory to run 100% of the time as the output item will never have a chance to backup, with the cost of increasing power demand.

Some items can be used to effectively get lots of points for comparatively little effort: